All resources provided within this site are free.
However any help toward running costs would be appreciated.
Thank you.

As I have already mentioned the female breasts vary so much in shape and size that I believe that there is no hard and fast rule on how they should look on your subject. When drawing natural breasts the important thing is to sketch what you see no matter how it looks in the finished work. Every woman has her own beauty and uniqueness no matter the size or shape of her breasts. Below are some examples of the many varying shapes of the natural breast and a rough guide on how to draw them. 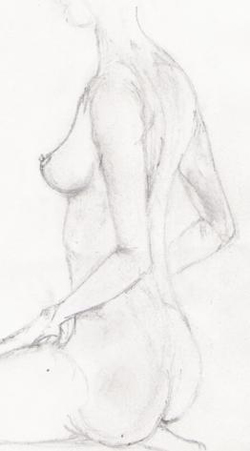 Swooping breasts
Swooping Breasts are quite common and are generally due to a lack of volume in the breast and are not generally due to sagging. One of the main; characteristics of swooping breasts is for the nipple to appear perter on the breast as it tends to point up more. This is a result of the curving of the breast from the collarbone to the nipple. When drawing a swooping breast it is important to gently curve the line from the collarbone at the top of the chest down to the top of the areola and from the bottom of the areola gently down and back into the rib cage drawing almost a semicircle back to the chest wall. Swooping breasts tend to sit up on the chest wall and stand out more giving a perky appearance. When adding the nipple make sure that it is pointing slightly upward as failing to do so will affect how the finished breast will look.

Droopy breasts.
The Ptotic or droopy breast is very common especially after pregnancy when there is a loss of volume in the breast and the areola has become enlarged. When drawing a droopy breast first draw a circle at the point on the chest wall where you want the breast to sit. Next, draw a slightly curving line from the collarbone at the top of the chest to roughly the outside edge of your circle just above the front midpoint of the front of the breast. The rest of your circle will form the bottom of the breast and should appear as a little bit more than a semi-circle as it curves back into the rib cage. The areola and the nipple will sit just below the centre point of the front of the breast and should point slightly down as shown in the sketch to the left. 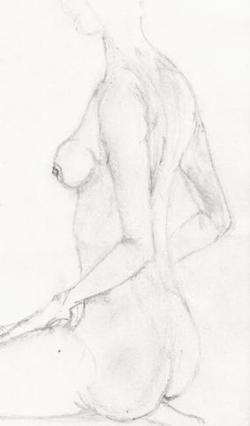 Saggy Breasts:
The Ptotic or saggy breast is also seen after pregnancy. It can also be a result of breastfeeding, a loss in weight or just a sign of getting older which should be taken into consideration when drawing an older subject with natural breasts. But this does not mean that a younger subject cannot have saggy breasts, especially if she has had a child. When drawing a saggy breast first draw an oval at the point on the chest where you want the breast to sit. Next, draw a slightly curved line from the collarbone at the top of the chest to about two thirds the way down the breast so that it finishes roughly at the top midpoint of your oval. This forms the complete breast and slightly emphasizes the fact that gravity is at hand forcing the bulk of the breast to the bottom. Make sure that when you draw the areola and the nipple you place them slightly below centre to again emphasize that the breast has sagged. 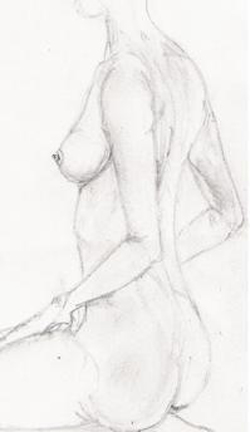 Rounded breasts,
Rounded breasts are said to be the preference of most males as they are considered sexy and to be what most fit sexy woman should have to attract the opposite sex. When drawing a rounded breast it is best to first draw a circle at the point on the chest that you want the breast to sit. Next, draw a slightly curved line from the top outer edge of the circle to the top of the chest just below the collarbone. Make sure when drawing your line that you do not straighten the breast out on its front edge as you will need to leave a slightly rounded appearance above the nipple as shown in the sketch to the left. The rest of the circle will form the rest of your rounded breast. Next, make sure that you place the areola and nipple at the midpoint to the front of the breast to give it that full rounded appearance. 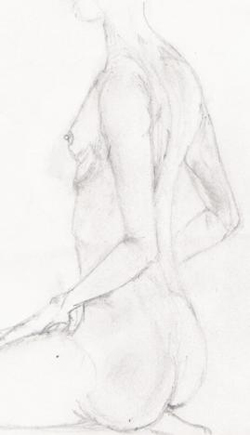 Flat breasts tend to cover a larger area on the chest as despite the fact that they the have volume they do not stick out, but instead lay flat upon the chest wall. Flat chests or small breasts also known as teen breasts tend to be associated with a younger woman or teenage girls but it is common in women of all ages. When drawing a flat breast you only need to draw a slightly curving line from the collarbone to where on the chest you want the breast finish as shown in the sketch to the left. Again try to place the areola and nipple roughly at the midpoint of the breast as despite the breast being flat the nipple still sits roughly at its centre as there is not enough of the breast to show any visible sag.