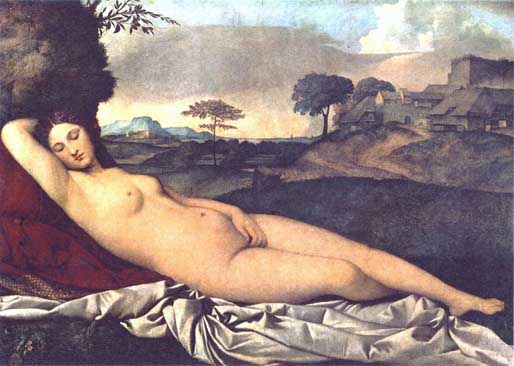 The Sleeping Venus, also known as the Dresden Venus is displayed at Gemäldegalerie Alte Meister, it is an oil on canvas and measures 108.50cm's in height and 175.00cms in length.
It is one of the last works of Giorgio Barbarelli da Castelfranco, and one of the first female reclining nudes in European painting of the time. It portrays a young naked female sleeping peacefully, oblivious to the gaze of others. Her slender profile appears to follow the contours of the landscape and hills behind.

The choice to portray a naked female marked a revolution in art and is considered by some authorities to be one of, if not the starting point of modern art.
Giorgione put a great deal of effort into painting the background details and shadows although it is believed that the painting was unfinished by him at the time due to his untimely death from the plague in 1510 at the age of thirty-three, resulting in the incomplete landscape and sky being finished by another famous renaissance artist by the name of Tiziano Vecelli or Tiziano Vecellio known to most art scholars as Titian, possibly the greatest Venetian artist of the sixteenth century.

Titian was a friend and colleague to Giorgione after joining him 1507 at his workshop as an assistant who would later go on to paint a similar reclining nude titled Venus of Urbino Which now hangs in the Uffuzi art gallery in Florence in the region of Tuscany, Italy.


In Giorgiones venus there are underlying erotic implications, Venus's raised arm, opening her body up implying a sensual feminine demeaner. Also by raising it she is fully exposing her breasts which appear to be full and rounded. Her pert nipples are visible implying a certain sense of arousal. The subtle placement of her left hand over her groin descretely covering what lies beneath, or is it suggesting something else. Is this just a brilliant depiction of a beautiful young naked female sleeping or is it something else. By the way the drapery is depicted it could suggest a portrayal of a romantic liason and that our subject is actually basking in the afterglow of her encounter? I say this as the drapery suggests movement. It appears stiff, rigid and drape like in comparison to the more softer flowing looking sheets depicted in similar paintings by Titian or Velázquez. They are slightly gathered at her waist suggesting that she may have had company and the sheets has been rucked up this way during their encounter owing to the movement of their bodies. The way she is posed also suggests that she isn't quite on the sheets but more to oneside of them as her left foot appears to be resting on the grass and grass can also be seen in the slight arch under her right knee reinforcing the idea. The sheets on which she lays are painted in silver which is a cold colour instead of the more commonly used warm tones for linens.